October, 2020: I wanted to be able to carry my gas generator, as well as my gas cans, outside of my van to keep any gasoline odors from being inside the van. Rocky 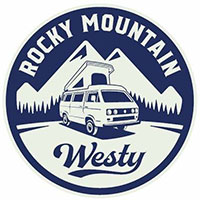 Mountain Westy/Van Cafe sells a swing-away, folding shelf setup similar to my tire carrier, but I have a dent on my right side that prevents another swing-away to be mounted and the dent fix is more than I want to pay. Then I saw that they came out with the  "switchback rack system" which could be added to my existing tire carrier system, so I decided I would go that route to allow me to add a folding shelf to hold my gear. There are several options as to the graphics/cutouts on the tray, but I chose the Westy cutout because it's cool! There was also one with the "Syncro" logo/text, which was also cool, but the Westy graphic won out, especially since the van graphic had a South African grill like mine.

I purchased all the parts and had the reconfiguration complete in no time and was hoping all my measurements were accurate so all the items I wanted to put on the shelf would actually fit. It worked out perfectly and there is exactly room for my Wen 2000 watt generator with my main took kit right behind it, as well as two RotopaX FX-3.5 FuelpaX 3-1/2 Gallon Gas Cans. I purchased the protective cover for the generator, which is bigger than it needs to be, so I am able to cover both the generator and the tool kit to keep them out of the elements. I got a cable lock which goes through the shelf Westy cutout graphic and then through both the handles of the generator and tool kit/box. This way, the cover fits over them while they are locked down and has the added benefit of keeping the locking mechanism safe from the elements. Another cable goes through the gas can handles and around the frame of the swing-away and is secured with a "weather proof" padlock. 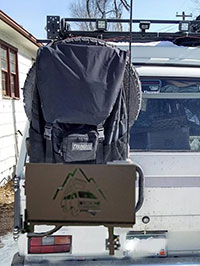 My Photoshop Mockup
Prior to Purchase