This entry is going back a ways, when I first purchased the van and had Joel at Green Syncro near Colorado Springs convert my tintop to a poptop. I thought it was worthy of this page, even though it was quite a while ago. Joel also did a bunch of other upgrades to the van, including installing a new poptop tent from GoWesty, a propane tank, propane heater, South African grill and updated headlights. The pictures below are mostly from Joel when he was doing the work and sending me updates. By the way, Joel was wonderful to work with and did a great job. He's also a hell of a nice guy!

When I purchased the van initially from Joel, he had just put in a freshly rebuilt engine, had the transmission rebuilt, added a couple of utility ports on the side of the van (water fill and 110v input) and serviced the viscous couplings (the VW 4WD mojo). The previous owner had already converted the interior to a full Westy with the kitchen, cabinetry, beds, etc., but from an older model which is fine by me. I was glad that part was already converted.

The Propex and stock rear heater outlets were goofy looking and the stock grill wouldn't fit due to the Propex outlet being so close, so I had a custom vent made by uniWerks Design and it now looks pretty great, no pun intended. See below:

In retrospect, the biggest mistake I made was not having Joel install complete insulation while the interior was removed. If I want to install insulation now, I'd have to remove the cabinets on the driver's side to insulate that side of the van. What a pain that would be. Looking at these pictures now, I realize how easy it would have been compared to now. After some camping in the Colorado winters, I understand just how cold the interior of the van can get, even with the window and poptop insulation I purchased. The Propex heater does an amazing job heating up the van in any temperature. But after the heater goes off, the van cools down quickly. If I leave the heater off overnight, the van interior is the same temperature as the outside temperature. Unfortunately, it just didn't occur to me to insulate at the time the interior was removed. Do'h! 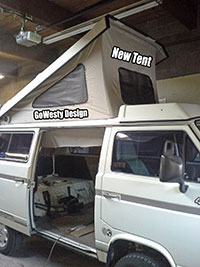