Van O'Brien and His Van 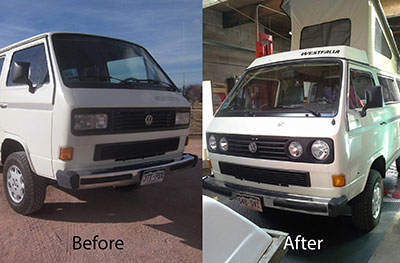 Since my van started out as a 7-passenger van, it took a little work to get it where I wanted it. Of course, it will never be completely where I want it, but it's fantastic as it is. When I purchased the van, it had already been partially converted with a full Westfalia interior, but still had a tin-top. I had Joel with Green Syncro near Colorado Springs, whom I purchased the van from, convert the top to a pop-top from a donor van he had and install a new tent. He also installed several other things, like a new propane tank, Propex heater, South African Grill, and more. Joel had already done some of the upgrades, like the rebuilt engine and transmission. The van also had a 2" lift and upgraded shocks when I purchased it. To see some more in-depth information about some of my more major upgrades, visit my Van Updates Page.
Jump down to my comprehensive list of upgrades

What is a Syncro? 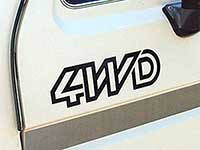 From 1986-1991 VW made the Vanagon in a 4WD version. It used a viscous coupling, so it was an automatically engaging 4WD -- if the rear wheels slipped, it kicked in the front until no longer needed. It worked very well and was available in all Vanagons & Westys. Syncros were made in Germany as KD kits, sent to Styer-Daimler-Puch in Austria for assembly and the installation of the 4WD drive train, then sent back to Germany for installation of the interior. 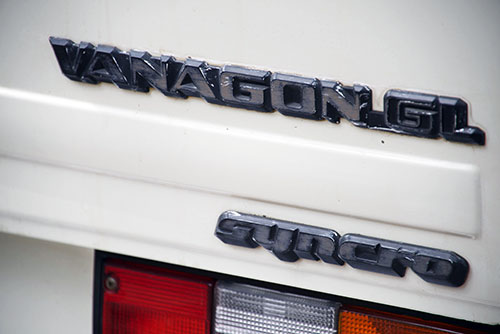 The 4WD is Styer's but is based on a Porsche design for viscous couplings. The design is well known in various forms, including considerable

military applications. The Syncros also had a few other bells & whistles. There was an extra gear -- a very low gear (Granny Gear) that you used only for extreme conditions, normally starting out in what would be the original 1st gear. The rear differential, a limited slip, also had a manual lock-up. Reverse, because it was on the same idler as the granny gear low, was also "granny gear" ratio.

Relatively few Syncros were imported to the United States, making them increasingly rare and highly sought after. The Syncros are appreciating in value and depending on condition and upgrades, can sell for upwards of $100K, however most with the Westfalia package sell for around $30K to $65K. Having a Subaru engine conversion can add even more value, while providing a much needed power boost. There are other popular engine upgrades as well, including turbo diesel, Ford Focus engines, and others. Upgrading my engine to a Subaru 2.5L engine is high on my wish list, however the conversion cost is way above my budget. If I had the skills to do the conversion myself I could save a ton of money, but I know my limitations and would have to hire a qualified mechanic to do the work, adding probably $10K to the cost. Probably the largest manufacturer of the parts needed for a Subaru conversion are made by Rocky Mountain Westy in Ft. Collins, Colorado. RMW will also do the conversion for you for the low low cost of about $18K. Yikes!

Fortunately for VW owners, there is The Samba, a wonderful online resource for everything

Volkswagen, including a Vanagon specific forum. The forum covers all variations of the Vanagon, including the Westfalia and Syncro versions. This forum has many owners/enthusiasts and covers pretty much all aspects of the vehicles. Some extremely knowledgeable folks are happy to give advice, answer questions and many have posted step-by-step instructions on how to do repairs, upgrades, and more. It's truly an amazing resource and you can follow the links below to learn more about this fantastic community. There is also an extensive classified section to find parts, accessories and entire vehicles.

Westfalia is the designation of various specially converted Volkswagen camper vans. It is named after Westfalia-Werke, the contractor that built the vans, which is headquartered in the town of Rheda-Wiedenbrück, located in the Westphalia region of Germany. The term “Westy" is short for “Westfalia," which is the once-defunct (but now re-emerging) German company that originally specialized in all things travel trailer related. In the 1950s, VW contracted Westfalia to “camperize” the VW Bus, and a legend was born. All throughout the ‘50s, ‘60s, ‘70s, ‘80s, ‘90s, and up to about 2002, VW and Westfalia had a very close relationship.

Most recognize a Westy as a VW van with a poptop or high top, a kitchen with a 2-burner stove, sink, and a 3-way fridge. A Westy also has multiple cabinets, two beds, tables that swiveled, a propane tank, a water tank, utility inlets on the outside, and front seats that swiveled around for additional seating when camped. Not all Westfalia conversions had pop-tops, and not all pop-top VW vans were converted by Westfalia. There were many other companies that produced pop-top conversions, as well.

A new Syncro Westy did some serious traveling even before it had its first owner. VW made the van, sent it to Styer-Daimler-Puch in Austria for the 4WD modifications, and then back to Germany for the Westfalia-Werke camper interior and back to VW again. From there they were shipped all over the world, but the Syncro version was shipped in much smaller numbers. Some Syncros had special versions, such as in South Africa which had larger wheels and additional headlights. Canadian versions had double pane windows which are better suited to colder climates.

The Volkswagen Type 2 (T3), both 2WD & 4WD, was the third generation of the Volkswagen Transporter and was marketed under various nameplates worldwide – including the Transporter or Caravelle in Europe, Microbus in South Africa, and Vanagon in North and South America.
And there were also variations 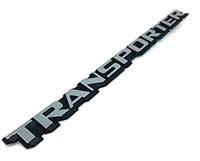 within the Vanagon designation:
Vanagon = vinyl seats and a very spartan interior.
Vanagon L = Luxury = had optional cloth seats, more upscale interior panels and an optional dashboard blower.
Vanagon GL = Grand Luxury = the nicest amenities, armrests, better quality.
Other takes on the "GL' designation include, Ganja Lounge, Good Luck, Good Looking, Good Life, Groovy Lovin, Get Lost, Gut-Less, and many more. Whenever someone asks me what it stands for, I'm going with "Ganja Lounge" from now on, lol. 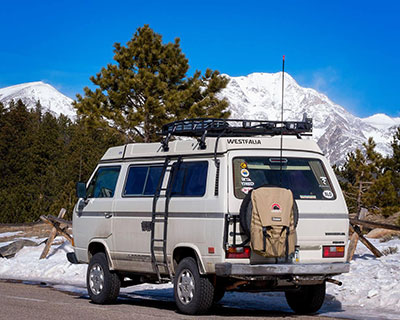 How Capable is a Syncro Off Road?

A stock Syncro is very capable off road. Add some bigger wheels and all terrain tires and the capabilities increase. A regular 2WD Vanagon is pretty amazing off road since it has rear wheel drive and 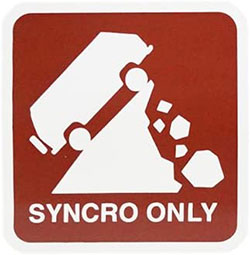 the engine is in the back, right over the drive wheels, giving it great traction. I had two regular 2WD Westfalia campers before I got my Syncro and was always surprised at where I could go in the forest. However, there were still some killer campsites that were out of my reach until I got the Syncro. For me personally, I don't push it very hard. I don't want to do any damage to the van if I can avoid it, so I put it in the granny gear and crawl along slow and easy over the rougher terrain. It's never failed to get me where I want to go and I've yet to get it seriously stuck.

Most Syncros have an optional rear locker for even better traction when needed. There were also options for a front locker, and a decoupler to have only the rear wheel drive to save on gas. A Syncro with all three 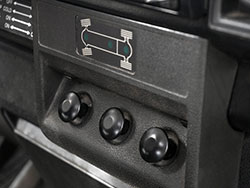 options is referred to as a 3-knob Syncro (see the image on the right). Some came without any knobs/lockers, such as mine. It's unfortunate that I don't have at least the rear lockers, but this was the Syncro I found and I decided it wasn't a deal breaker. As I've mentioned, I have yet to get seriously stuck, so not a big deal. I do carry some Tred Recovery Boards to help if I do get stuck, but I haven't had to use these, either. My High-Lift Jack can also be used as an ad hoc "winch in a pinch". A standard Syncro with no lockers is still quite a capable off road vehicle, especially with the granny gear and good A/T tires..

Many Syncro owners certainly do not "baby" theirs and push them to their limits, showing just how capable an off- roader the Syncro can be. There are events and gatherings where Syncro owners get together and put their vans through their paces. Events like Syncro de Mayo and Syncro Fest in the USA, and others throughout the world. GoWesty created a beast of a Syncro and has raced it in the 1250 mile NORRA Mexican 1000 rally, This page has many videos of their van in action, and includes videos of them transforming the van into a Baja-crushing 4WD Racing Syncro.

There are many videos I found on YouTube of Syncros in action and I put just a few below for your viewing pleasure. Obviously, go full screen when playing.

Here is a fairly comprehensive list of updates and improvements I've made to my Syncro since I purchased it in 2016:

Upgrades already completed when I purchased the van:

Upgrades I have done (*Done by Green Syncro):
Read more about the work Joel at Green Syncro did for me. 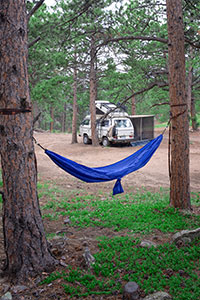 Westy Bliss at 9000'
This is one of my favorite campsites in Roosevelt National Forest and is only accessible with 4WD. I've watched other 4x4's fail to make it up the hill that leads to this campsite. My Syncro easily crawls up the hill, much to other people's amazement. I heard one guy who failed in a Ford Bronco after seeing me go up, holler to his wife standing at the top of the hill, "That's a Volkswagen?"